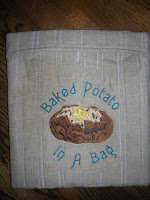 My on-line group is running a monthly challenge for its members this year. The first challenge was a potato baker--one throws washed taters in the bag, no pricking necessary, and they go into the microwave for two or three minutes. People who have made these bags claim that the potatoes are cooked to fluffy perfection. I'm really hoping that the microwave doesn't melt the rayon thread used in the embroidery design--don't want to add that "little something extra" to the taste of the potatoes. Eww!

Downloaded the directions for this project from Sherry Titzer (http://www.atimetostitch.com/). She gives detailed, step-by-step instructions with excellent photographs. The embroidery design is a free download from Serena Smith (http://www.embtreasures.com/), who is a talented digitizer. (Serena Smith also has directions on making one of these bags and they are very clear.)

Up-Date: We used the potato baker and they were the best potatoes from the microwave! As with anything else, it must be used with caution, so follow the directions that are on the website. This project only takes about thirty minutes if you use prequilted fabric or a placemat--it's worth every second! 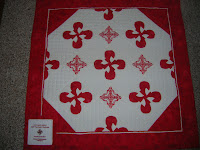 Have been feverishly working on my challenge quilt for Love Apple Quilter's 2009 Show in March. Wish I could show it now, but it is to remain anonymous until the vote is taken. Instead, I decided to show the one made for the last quilt show.

The challenge last time, was to create a quilt reminiscent of the 1930's two-color quilt. We purchased the challenge kit with the red fabric and were allowed to add either a white or off-white fabric.

Played and played around with designs for at least eight months and this idea was the best I had. The spinning blocks reminded me of fleur-de-lis and the wide spaces needed a little embellishment. Decided on an embroidery design digitized by Louise McDonough and it seemed to compliment the design perfectly.

Very pleased that my quilt received an honorable mention that year! Will up-date in March with a photo of this year's creation.
Posted by Tuffimom at 11:55 AM 1 comment: