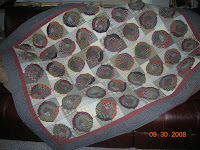 Finishing this quilt is sort of closing a chapter on a very trying time in my life. The girls and I were hit head-on by a truck which resulted in several broken bones, one of which was my collar bone.

A friend of mine had made this same quilt and had given me the pattern years ago. I had started collecting all kinds of homespuns, but there were so many other projects on the list before it. After the accident, accurate piecing was not an option while in a sling, so this simple pattern of sewing circles was perfect. Once the piecing was done, the dilemma of how to quilt it presented itself. Played with many designs, but had to pick one that was easy to do on my Little Gracie frame. With only 9 inches of quilting space under my Brother 1500, it was a challenge to do a complimentary design. Opted to go more primitive, since that seemed to be the feel of the quilt.

Every time I worked on this quilt, it brought back unpleasant memories of the accident. After three years, decided that it was time to put the accident behind me and finish the quilt. Now it is done and will bring warmth and new memories to those who use it.
Posted by Tuffimom at 7:59 AM No comments: 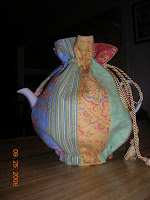 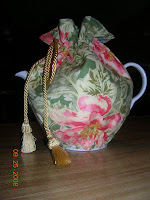 This cozy project is for my sister on her birthday--today!! (She also shares her birthday with my DH, but he doesn't need a tea cozy.) She has admired the one I made for our mother for several years and offered it as a gift idea. Of course, I would make one for her! First of all, she is my only sister and secondly, she's never asked me for anything before. It was perfect.
Purchased the pattern years ago and it is well-written and easily assembled. The best part is that the cozy is reversible, so it can be two different cozies in one. Kind of fun to use all the decorative stitches on one's sewing machine. I did add the tassles as an extra decorative touch.
The tricky part is that she wanted a particular color to go with her dishes. After scouring about ten on-line stores, went to The Village Quilter and Susan helped me pick out fabric that would fit the style and color of her dishes. Guess we'll know for sure when I give it to her at her birthday party!
Posted by Tuffimom at 2:50 PM 1 comment: 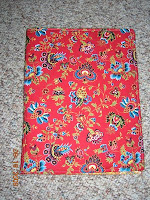 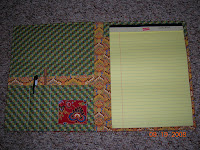 Was wondering if better ideas come to more stylish notebooks? Guess we'll see over time, but just thankful that this one is so bright that I will never lose it.
Using Michael Miller fabrics and a Pink Chalk pattern, went to work creating a handy way to keep all my notes in order for all the meetings and various workshops I attend. The fabric was a delight, but there were a few measurement issues with the pattern. If you decide to use this pattern, measure the pieces on the template sheet, not the written direction measurements. None of the mistakes were critical to finishing the project, just annoying.
Posted by Tuffimom at 2:33 PM 2 comments: 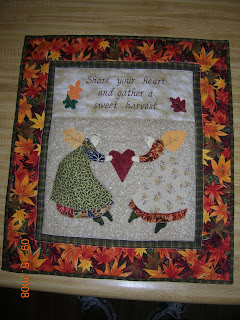 One of the fun activities Block Buddies sponsors is periodic wall-hanging swap. We all do our best work in creating a simple project that can be used as a reminder of the friends we have all over the world.
This year, I made a Nancy Halverson design from her Autumn book. Used the machine applique technique I learned in Karen Kay Buckley's workshop to do the angels. To save on time, the embroidery machine did a wonderful job on the lettering. Was very pleased with how all the colors came together, especially since I did not buy a single piece of fabric to complete this project--a personal first!!
Posted by Tuffimom at 12:58 PM 1 comment: