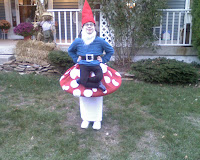 Well, it's that time of year when I put aside my quilting to work on our daughters' Halloween costumes. Being Christians, we use this time of year to be creative and make costumes that can be a family project. Our older daughter is doing the work on her costume, now that she is a teenager and I concentrated my efforts on the other.

Last Halloween, it was decided that our sweet little girl would be the Travelocity gnome. Thought about this costume for better part of a year and had a plan. Then, FamilyFun magazine had their annual costume edition and there was a ready made gnome...and one on a mushroom! Our family's passion with fungi dictated that this was the costume to make.

After visiting quite a few stores, hot gluing pool noodles, sewing a mushroom cap, assembling a white skirt for a stem, gluing felt circles, stuffing pant legs and making a belt out of duct tape, cardboard and aluminum foil, the costume was ready for the school's annual carnival.

Much to our delight, her costume won the prize for "Most Original!" She happily claimed her prize--nearly knocking down anyone in her path. (It's quite a wide costume!)

Hmm, better get started on next year!!
Posted by Tuffimom at 10:30 PM 1 comment: 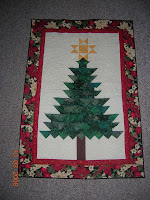 This Christmas wall-hanging is one that took far too long to be finished. While at a quilt show, my mother saw this quilt kit and asked me to finish it for her. Of course! The fabrics were so beautiful--an assortment of greens, lovely background and a wonderful border print. Did find out, however, that the instructions had some serious flaws. Took me quite a while to recover from their miscalculations. Really wish that pattern designers would test their patterns more! Nothing is more frustrating than trying to recover from mistakes.

Did run into a glitch or two of my own when I went to quilt it. Prairie points and a machine quilting frame are a tricky combination. Had to finish the quilt while sitting at a machine which takes much longer. After a while, late is late, so one does the best they can.

Happily, it is now done and I can give it to my mother and before this Christmas--only several Christmases late!
Posted by Tuffimom at 4:31 PM No comments: